2021 Regionals By The Numbers

2021 Regionals By The Numbers

Message reputation : 100% (1 vote)
Regional assignments are out at long last and that means it’s time for some analysis! We will have our week one analysis out as soon as possible, but in the meantime, we have crunched some numbers to bring you our initial thoughts on the difficulty of each regional.

First, we can use our rank metrics to get a sense of the overall strength of each region. Ranks are the simplest metric for measuring the strength of teams, a lower average rank indicates better teams on the whole. The first column on our chart represents the average rank of the teams at each regional.

It’s also important to look at how strong the top teams at a tournament are because these are the teams you have to displace if you want to get a bid. Thus, the second column looks at the average rank of the top n teams at each regional where “n” is the number of bids allocated to that regional.

TPR points look at the raw data that AMTA uses to assign those ranks (sometimes there are large jumps in rank so this can be a little more accurate). For TPR we can look at the sum of the TPR for all of the teams there which gives us a sense of the total power at the tournament. Our third column looks at the total number of TPR points present in a region.

Once again, we can use TPR to look at just the average of the top teams. This tells us how much power you have to displace to get a bid. The fifth column looks at the average number of TPR points held by the top n teams in a region where “n” is the number of bids allocated to that regional. 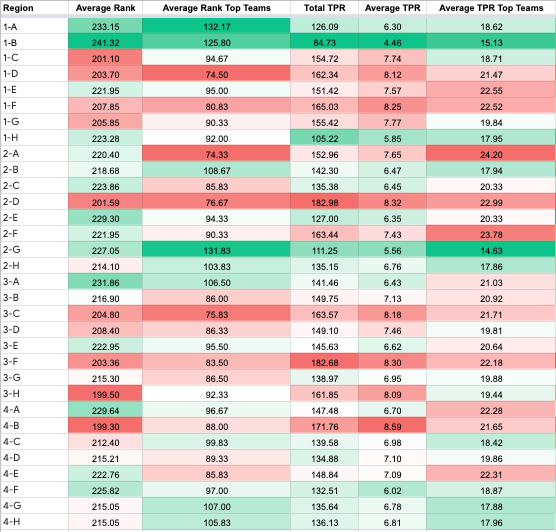 The next question at the very top of our mind is how this year’s regionals compare to last year’s regionals in terms of numerical fairness. Over the last few years there has been a general view that any disparity in terms of difficulty between the regions is a result of geographic limitations on what AMTA can do. So we wanted to see if things got better when geography was no longer a concern. In order to do that we looked at the disparity between the hardest regional and the easiest regional and compared AMTA’s work from this year to last year in each metric. 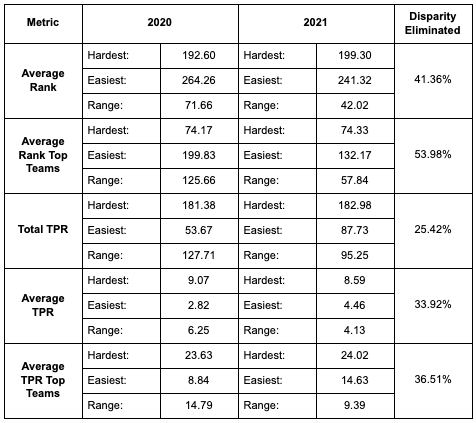 At first glance this looks like by getting rid of geographic concerns AMTA managed to eliminate between ¼ and ½ of the strength disparity in every category this year.

However there was one really major issue that was affecting last year’s regionals and it was both Cornell teams dropping out of Buffalo very late making Buffalo the numerically weakest regional we have seen in our time doing this by a long shot. So in order to make sure this wasn’t just the Buffalo effect we eliminated last year’s Buffalo regionals from our computations and did them again. This time, they don’t look so rosy: 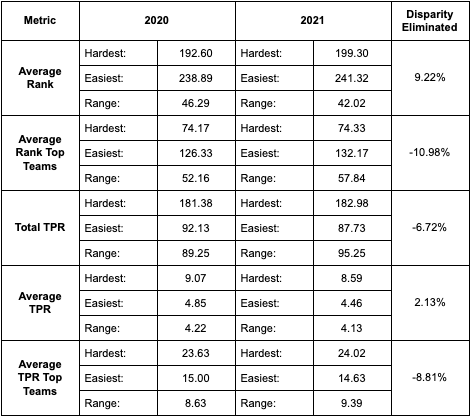 This is particularly striking because they didn’t have to be imbalanced numerically. Suppose for example AMTA has selected regionals by the simple method of going down the ranks list, puting one team in each regional until each had one and then doubling back and putting one team in each regional sequentially in the opposite direction (that is if Rank 1 went in 1-A, Rank 2 went in 1-B, and so on until Rank 32 when in 4-H, and then Rank 33 when in 4-H, Rank 34 went in 4-G, and so on until Rank 64 went in 1-A). There would still be some slight variation in the regionals due to the fact that there are only 293 ranked teams which don't fit evenly into 32 regionals and currently 655 teams which also don’t fit evenly into 32 regionals. But the disparity in average rank between the hardest and easiest region would be between 226.70 and 229.86 for a difference of 3.16. This would have eliminated 93.17% of the disparity from 2020 (using the non-Buffalo numbers). Meanwhile the disparity in Average Rank of Top teams would be 0, eliminating 100% of the disparity. The TPR based metrics would have slightly wider gaps using that metric. The TPR Sum disparity would be 147.08-124.08=23.00 eliminating 74.23% of the 2020 disparity. The TPR Average disparity would be 7.35-6.43=1.00 eliminating 78.20% of the 2020 disparity. The TPR Average for Top Teams disparity would be 22.68-19.10=3.58 eliminating 58.52% of the 2020 disparity. Notably this isn’t even the most even way of splitting up the teams numerically speaking, it's just the easiest way to split them up and make them pretty even. Obviously AMTA has more considerations than just numerical balance (some teams can’t compete on certain weekends, etc). But it is notable how little has changed this year given how much could have.

TPR is inherently geographically biased. They have a dependence on locationally-based tournament performance (regionals -> ORCS). Yes, ORCS have always had wider, geographically broader pools, but still a strong bias.

I understand that most recent year TPR is probably best estimate of current strength that you have available. But in order to best estimate your "disparity" eliminated, you should do some "geographic normalization" based on past X national championships. For example, for the last five NCT, if I split the pool up to four broad groups by geography, their relative performance compared to expected baseline performance if NCT were perfectly balanced could be one way to normalize. You can look at specific matchups, overall record, etc and arrive at a way to quantify geographical bias thus disparity that way and adjust for that in your calculation.

I also think AMTA made these regionals using data other than TPR from 2019. My understanding is that they calculated TPR for teams that they were able to for last year, and are factoring that into the regionals assignments. Having more accurate data might be helpful here, although since AMTA hasn't shared that with us there isn't much we can do, short of calculating it ourselves.

Given what you have to work with this is super impressive. An interesting experiment this year, if nothing else.

TheRealMockProdigy wrote:I also think AMTA made these regionals using data other than TPR from 2019. My understanding is that they calculated TPR for teams that they were able to for last year, and are factoring that into the regionals assignments. Having more accurate data might be helpful here, although since AMTA hasn't shared that with us there isn't much we can do, short of calculating it ourselves.

This is really interesting if its true. Do you know if AMTA plans to take the same approach for the ORCS tiers? Seems very strange to sort 2021 teams based on 2019 TPR at ORCS.

I don't see why they wouldn't. This is certainly a situation where some transparency from AMTA would be really beneficial.