2022 Regionals By The Numbers

2022 Regionals By The Numbers

Regional assignments are out at long last and that means it’s time for some analysis! We will have our week one analysis out as soon as possible, but in the meantime, we have crunched some numbers to bring you our initial thoughts on the difficulty of each regional.

First, we can use our rank metrics to get a sense of the overall strength of each region. Ranks are the simplest metric for measuring the strength of teams, a lower average rank indicates better teams on the whole. The first column on our chart represents the average rank of the teams at each regional.

It’s also important to look at how strong the top teams at a tournament are because these are the teams you have to displace if you want to get a bid. Thus, the second column looks at the average rank of the top n teams at each regional where “n” is the number of bids allocated to that regional. The important thing to note here is that we don’t know exactly how many bids each regional is getting this year. We are basing our calculation of “n” on the formula AMTA lays out in their rules, but as teams drop and get added the number of bids will change and AMTA often changed their bid allocation formula at the midyear meeting which hasn’t happened yet. In addition, it isn’t clear whether the online regionals are getting any bids at all! We expect that some regionals could have as few as three bids and others as many as eight bids.

TPR points look at the raw data that AMTA uses to assign those ranks (sometimes there are large jumps in rank so this can be a little more accurate). For TPR we can look at the sum of the TPR for all of the teams there which gives us a sense of the total power at the tournament. Our third column looks at the total number of TPR points present in a region.

Once again, we can use TPR to look at just the average of the top teams. This tells us how much power you have to displace to get a bid. The fifth column looks at the average number of TPR points held by the top n teams in a region where “n” is the number of bids allocated to that regional.

A Look at Parity:

Given the return to geographically balanced ORCS this year, we were quite worried that the distance between different Regions in terms of difficulty would grow a lot from last year and even from years prior. The reason for the expected loss of parity from the Pre-COVID situation is simple: geographically mixed regionals/ORCS will mess with TPR. Usually TPR is based on your performance against the other teams at your regionals and ORCS rather than your performance against a national pool. Even the TPR points that come from NCT wins depend on making it to NCT and if you come from a region where it is really hard to make NCT, you won’t get those points. We have long suspected that there was some degree to which, for example west coast TPRs were disconnected from other TPR’s because the West Coast only had one ORCS and only so many teams can get out of it which can artificially depress their TPR results. Sure enough the moment we had geographically balanced tournaments we saw some shifts in who bid at what levels. More Midwestern teams than ever made it to the ORCS level and fewer coastal teams did. But the coasts far outperformed their usual averages in terms of getting teams to NCT. This will result in more Coastal teams with very top TPR’s and more Midwestern teams with medium TPR’s than we had in the Pre-COVID landscape. Meanwhile, the southern Midwest and the Southwest (the pool that ordinarily qualifies out of the Memphis ORCS) simply performed poorly when they had to qualify through a national field.

All of that makes Mr. Detsky’s job much harder when we suddenly have to rebalance things based on regions. So it is unsurprising that this year the regional parity is significantly worse than normal. That said, the degree to which the parity has degraded is somewhat alarming.

The following chart shows the parity when regionals were first assigned for the last three years and compares 2022 to 2020 (the last Pre-COVID year) in all metrics. We will exclude the online regional from all of this since that’s a special case AMTA didn't have much control over (meaning that for these purposes the value for "easiest" will be the value of the easiest in-person regional). 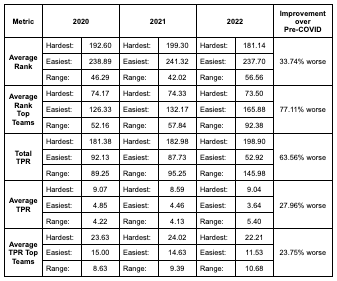