Message reputation : 100% (2 votes)
Regional assignments are out and that means it’s time for some analysis! We will have our week one analysis out as soon as possible, but in the meantime, we have crunched some numbers to bring you our initial thoughts on the difficulty of each regional.

First, we can use our rank metrics to get a sense of the overall strength of each region. Rank are the simplest metric for measuring the strength of teams, a lower average rank indicates better teams on the whole. The first column on our chart represents the average rank of the teams at each regional.

It’s also important to look at how strong the top teams at a tournament are because these are the teams you have to displace if you want to get a bid. Thus, the second column looks at the average rank of the top 6 teams at each regional.

TPR points looks at the raw data that AMTA uses to assign those ranks (sometimes there are large jumps in rank so this can be a little more accurate). For TPR we can look at the sum of the TPR for all of the teams there which gives us a sense of the total power at the tournament. Our third column looks at the total number of TPR points present in a region.

We can also look at average number of TPR points for a team in a region to take into account the fact that  different tournaments have different numbers of teams. This looks at how strong the average team at the tournament is. Our fourth column looks at the average TPR points of a team in the region.

Once again, we can use TPR look at just the average of the top teams. This tells us how much power you have to displace to get a bid. The fifth column looks at the average number of TPR points held by the top six teams in a region. 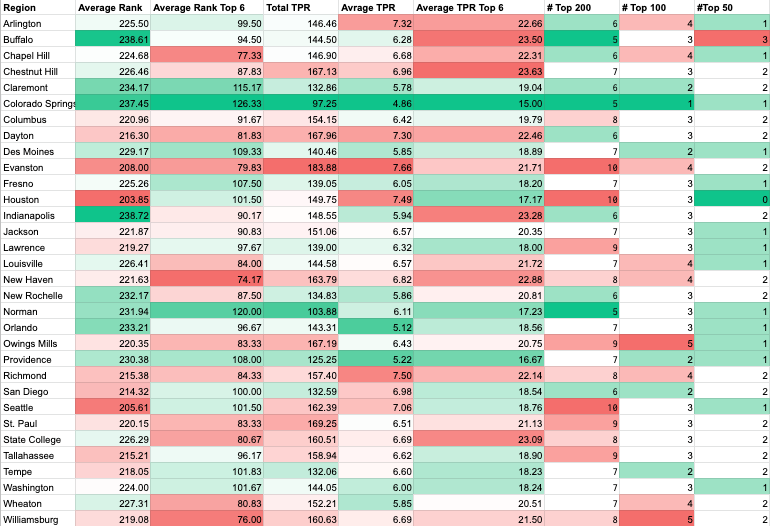 A Look Ahead To ORCS:
Because this year we don’t have the multi-feeder regionals, we can run predictions on what each ORCS is going to look like. We created predicted ORCS fields by assuming that the top six ranked teams from each region would make it through. We then eliminated C+ teams from the ORCS fields and replaced with the next highest overall ranked teams (the predicted open bids).

We evaluated each ORCS based on the same metrics as above:

Notably, the east coast ORCS look like their usual misery (with Cincinnati turning out to be a mixed Midwest/East Coast ORCS this year to make up for the loss of Wilmington). If you have to pick an ORCS to go to, Santa Monica or Memphis would be great choices.

We also looked at what teams were in the top 6 of each ORCS (which has the advantage of being more predictable than the bottom of the field). Notably, there are going to be some pretty big discrepancies in who is predicted to make it out of each ORCS. In Lancaster, there are top 40 teams not predicted to make it to nationals (#34 Georgetown being the last in and #38 Fordham LC being the first out by pure numerical prediction). In Memphis, on the other hand, #64 Alabama, #60 Georgia B, and #53 Baylor A are all predicted to make it out. In fact, out of the six teams predicted to qualify from Memphis, three are teams that would not have qualified by rank out of ANY other ORCS. In fact, in several ORCS, those three teams wouldn’t even be the first out, and in Lancaster, they would be behind both Fordham and Rutgers, neither of whom are predicted to qualify.

Of course all of this is subject to change as new teams join and AMTA shifts power around after regionals, so this could all play out in a completely different way. But with the information we have now this is the break down.

Message reputation : 100% (3 votes)
I have to say I’m pretty disappointed in these ORCS allocations. It seems like almost every year, the board decides to make Lancaster into a bloodbath, and Princeton isn’t much better this year. Compare that to Memphis which is once again a joke (and has been a joke in recent years too). And at the top, the Rhodes teams can’t even hit each other. I get that there are geographic limitations to what they can do, but there has to be a better way than this, because right now it seems like whether you make it through is heavily dependent on where your school is.

That being said, I don’t think this is the team and feeder committee’s fault. Are there things I would change? Yes. But they seem to have done a pretty ok job assigning teams given where the host sites are relative to where the power is.

I think the real people we need to be asking for an explanation here are the TAC and host picking people. Why were all the ORCS pushed towards the middle of the country and away from the coasts when so much of the power is on the coasts? That means that either the East Coast teams are going to have drive hours and hours inland (which the committee seems unwilling to make them do) or the ORCs are going to have serious regional discrepancies in power.

Last year when there were 9 ORCS, there were 2 in the Northeast, 1 in the middle of the East Coast, and one in the Southeast. Then there where three in the Midwest and one in the mid south. And of course the one in the West. Breaking this up into three clusters (East, Middle, West), there were four in the East, four in the Middle, and one West. Last year the Middle ORCS were already significantly easier on average than the East ones based on all numerical data. So logic would tell us that when the eliminate an ORCS it should be from the middle to balance that out (put more power teams per ORCS in the middle and fewer in the East). But instead they got rid of an East Coast ORCS and increased both the predicted discrepancy and the drive times for the East Coast teams (teams from the Virginia/DC area are driving into Cincinnati).

Another way to look at it is to go back to the last time we had 8 ORCS. Two years ago we had three Northeast ORCS, one Southeast ORCS, two Midwest ORCS, one Mid-South ORCS, and one West ORCS. In other words, four East, three Middle, on West. And when they did that the East ORCS were already numerically harder than the Middle ORCS. So why did they move one of the ORCS to the Middle this year and leave it at three East, four Middle, one West?

I know that some of this may be because of who offered to host, but there are multiple sites hosting East regionals this year that have hosted ORCS in the past. According to the Board minutes, one of those sites even offered to host NCT in future, so it’s not like they are downsizing. I just don’t get why the sites are allocated the way they are this year.

I think AMTA should consider changing to a more graduated scale. I would propose a rules change where AMTA allocated bids by counting how many teams there are (lets say two weeks before regionals), dividing by the number of bids to ORCS to get the number of bids per team and then assigning that way. You round the number of bids each regional gets down so that nobody gets partial bids. Any leftover bids become open bids.

This would’t be a difficult rules change to implement and I have always wondered why AMTA doesn’t do it this way.

If they wanted to make it even more balanced, they could allocate bids based on the total power in a region (measured by TPR or some other metric). This would be a little harder but would also mean that you aren't penalized for having a super strong team in your regional. I know some club sports do things like that, and it feels like it might be something AMTA might be open to in the long run, given their recent move to a TPR based ORCS seeding system. But it's obviously a bit more cumbersome to handle than a system purely based on how many teams there are.