We at Mock Analysis Is My Drug are extremely excited for the unofficial beginning of the AMTA season with the case release on Thursday, August 15th! We’re all about to dive headfirst into preparing the case for early season invitationals.

We thought it’d be fun to do the same thing we did last year and preview the 2019-20 season in order to make some predictions before we get any indications from the case about which programs might and might not be successful. So we put our heads together and created everything below so that we can start a discussion about where every program stands and where they’ll go moving forward. This post has 4 parts: (1) a table of which competitors graduated from each 2019 Top 10 NCT roster, (2) our MAIMD top 25 Power Rankings for the upcoming season, (3) a list of individual competitors to look out for, and (4), some predictions for this year’s tournament results.

Everything here is meant to start a discussion. We don’t expect everything we have to be correct or that everyone will agree with us. But we hope that you find this post interesting and engaging as we transition into another exciting year of mock trial!

In the table below, we have compiled data on which competitors are graduating each team that competed at Nationals in Philadelphia and placed in the Top 10 in their division. We used this information in creating our Power Rankings - for example, although Rhodes qualified to the final round in 2019, they are losing 9 out of 10 of their A team members, including every competitor from the final round. On the other hand, a team like Ohio State B is losing almost no competitors from their top-10 roster. Of course, not everybody who is eligible to return will necessarily return - so please PM us if we missed anything. 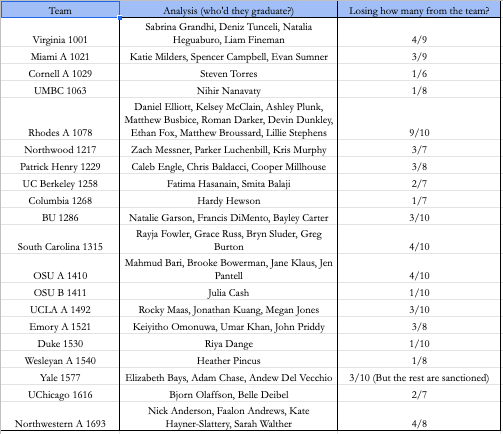 Mock Analysis is My Drug is pleased to include our Preseason Top 25 Power Rankings. These rankings were based on a composite of the rankings of all of our contributors, based on our own competitive experiences from previous seasons as well as tab summary analysis and number-crunching. These rankings are meant to reflect overall team power from the very first invitational all the way to the National Championship. We recognize that these types of rankings are inherently subjective

We analyzed tab summaries from the past three seasons as well as compiled thoughts based on the rounds that each of our contributors have seen. From that analysis, we’ve crafted a list of accomplished individual competitors returning for the upcoming season that we think will perform particularly well. Some of these individuals made the list for taking an extraordinary number of awards this year, others may have taken fewer awards (particularly if they were overshadowed by someone who has now graduated), but based on our experiences with these individuals we think all of them will be stand outs this year. Please let us know who we’ve missed - we’re certain we don’t have every elite competitor in the country on this list! 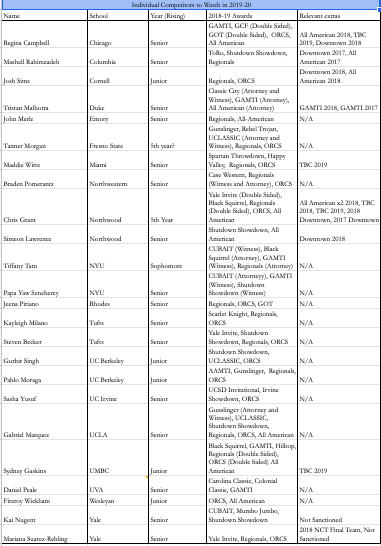 Program most likely to get two teams to NCT - Rhodes College